‘It’s fantastic to make a discovery, but even cooler if we can really help patients’

From a scientific idea to a multi-million euro investment: the successes of the many NWO Venture Challenge alumni reveal what can be achieved if you take science out of the lab onto the market. With the Venture Challenge, teams of starting entrepreneurs in the life sciences and health sector receive coaching to develop their business case. From today onwards, a new round of the programme is open for applications.

‘We were already leading the way in this field and possessed the required knowledge to act quickly’, says professor of chemical biology Luc Brunsveld (Eindhoven University of Technology) about the moment that he and his colleagues decided to participate in the 2019 Venture Challenge. ‘But as soon as you decide to market your idea, you immediately face all kinds of questions. How can I set up a company? How can I come into contact with investors? How can I make my aim and plan as relevant as possible? The Venture Challenge provided considerable help in answering these questions.’

Time to go to market

Brunsveld’s team came to the Venture Challenge with screening technologies aimed at discovering molecules that cannot be reached with conventional drugs. These molecules act as a sort of molecular glue to stabilise disease-causing proteins. In the meantime, the start-up biotechnology company Ambagon Therapeutics that emerged from this has already become quite successful. In January of this year, the company managed to secure an investment of 85 million dollars. Thanks to this investment, it can further expand its platform for drug development and further research into the ‘molecular glue’ molecules. Brunsveld: ‘When you reach the point that you have come to the end of the academic process, but you have the feeling that it looks good, then perhaps you should try that out via a start-up.’ 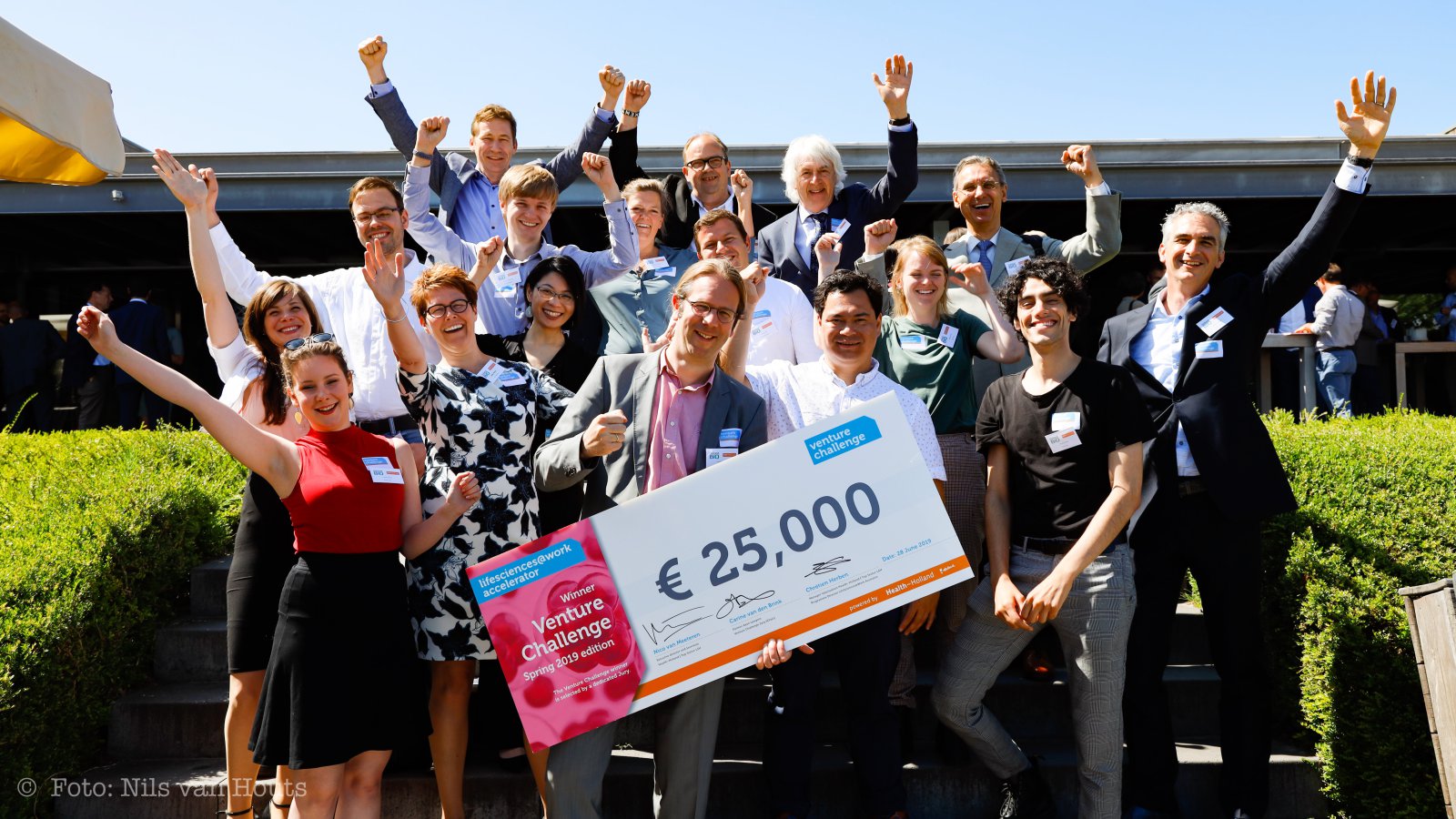 That was the reason that Brunsveld, together with colleague Christian Ottmann and the first Ambagon team member Eline Sijbesma, decided to participate in the Venture Challenge. ‘We really benefited from the sessions where we came together and worked intensively for three full days, gained feedback and ideas and learned from others who were working on similar things. The cases are very different, but we often look for answers to the same kinds of questions. You can therefore learn a lot from each other without being each other’s competitor.’ The programme not only helped Ambagon to come up with a clear message, but also to establish the right contacts. ‘The Venture Challenge really does help to very swiftly gain visibility in the Dutch network of investors. You get to know people who you will need at a later stage. For example, there was a presentation from INKEF, who later became one of our investors.’ Brunsveld’s team won their round of the Venture Challenge with their pitch to the jury. ‘It was intensive and we had to work really hard, but it was a great experience.’

A paper is just the beginning

Despite all of the fantastic success stories many scientific discoveries never reach the market. Entrepreneurial researchers often lack the experience and knowledge to set up a commercial organisation, and for private investors and experienced entrepreneurs, it is normally too early to get involved in the start-up phase. ‘We came into the Venture Challenge as three UMC Utrecht researchers with a remarkable scientific discovery, but with very limited knowledge about matters such as starting a company’, says researcher Marc van Moorsel. Together with his team, he participated in the 2018 round of the Venture Challenge to investigate what would be the best way to market a protein discovered in the lab. The protein can switch on the body’s own mechanism to stimulate thrombolysis, the breakdown of blood clots. ‘Ordinarily, research into drugs stops once we have demonstrated that the substance in question works reasonably well in a pilot study. Then we write a paper about it and that’s the end of the story. However, in the case of the Venture Challenge, the paper is just the beginning. Subsequently, the question is: how do you proceed from there?’ 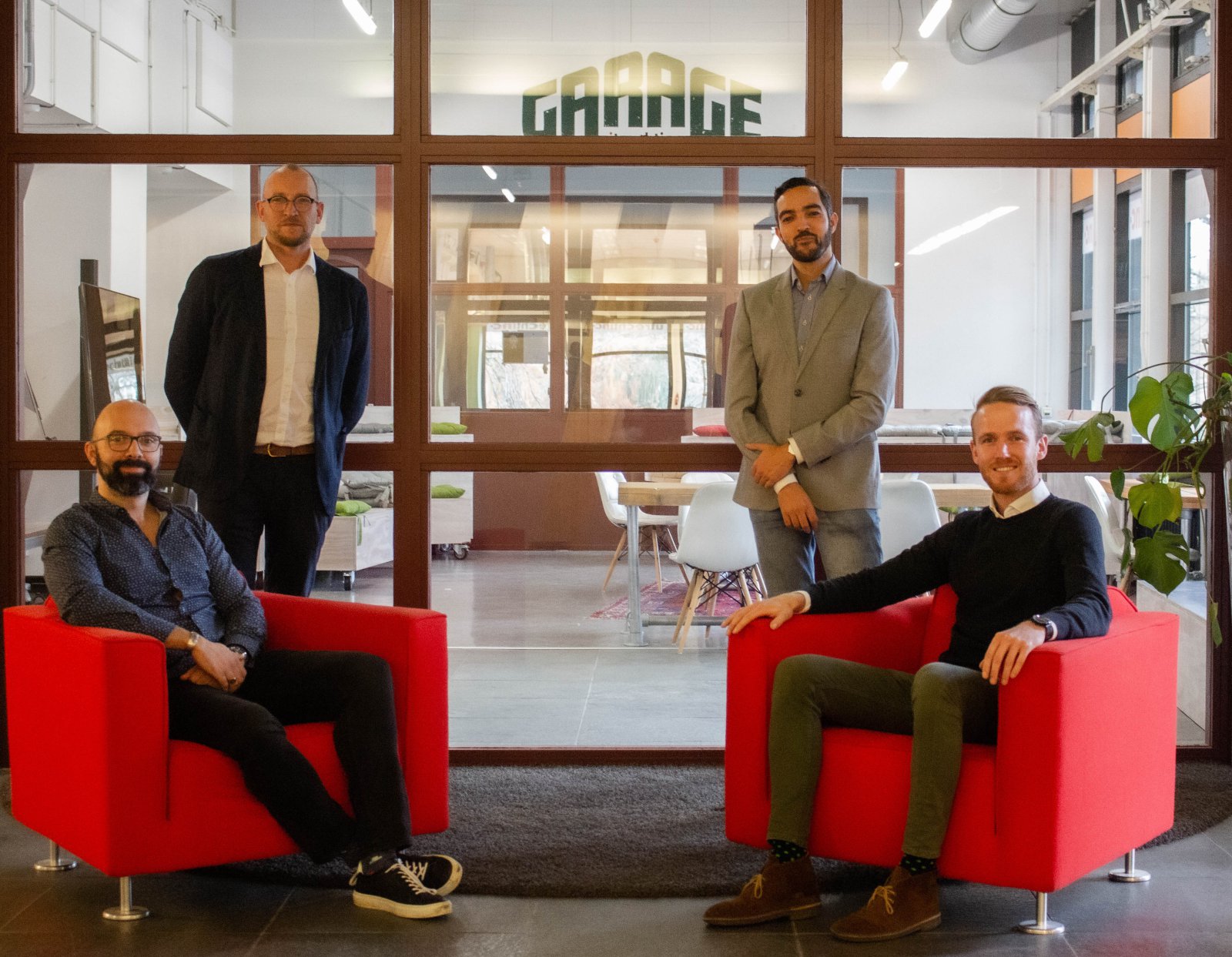 The most promising find

‘It is important that academics dare to establish a start-up’, thinks Van Moorsel. There is an element of uncertainty in the story because there are an awful lot of molecules that perform well in the laboratory, but it is impossible to test everything in the following phase. So you can only bring the most promising find to the next level. In this initial phase, you need someone to help you on your way because it is then often still too early to get involved for pharmaceutical companies.’ In the case of Van Moorsel’s team, that proved to be very successful. With the company TargED an investment round of 39 million euros has now been concluded so that research into their newly developed drug Microlyse can be advanced in a clinical setting. The drug could make it possible to treat many different thrombotic indications, from extremely rare diseases to major health problems, such as a stroke or heart attack. The Venture Challenge has laid an important foundation for that success: ‘For us, it really was the kickstart to investigate whether we could stand on our own two feet. It ensured that we thought about the right steps but, in particular, that we became confident as well. After the Venture Challenge, it took us another good two years, now with the help of external knowledge, to properly set up the company. During that period, the funding from Take-Off 1, which we applied for after the Venture Challenge, also helped. Eighteen months later, we applied for and received funding via Take-Off 2 (early phase trajectory, ed.). Then, two years after the Venture Challenge, we received a large seed investment. All of these steps have contributed to the major funding that we have now acquired. With that funding, we can now actually enter the critical phase.’

‘The Venture Challenge also helped in a very practical manner’, says Van Moorsel. ‘We were told about everything that we needed: funding, a slide deck, a development plan …’ Now Van Moorsel’s main focus is realising the development steps so that TargED can be launched on the market. ‘The company is effectively just a vehicle we need to bring the drug to the market. It’s fantastic to make a discovery, but even cooler if we can really help patients ’

About the Venture Challenge

For two months, starting entrepreneurs in the life sciences and health sector are groomed to start a company on the basis of their promising innovations for the healthcare of the future. Fixed elements in the programme are two intensive, three-day boot camps and regular coaching sessions to work on producing or refining the business case. The trajectory is concluded with pitches from the participants to a jury of investors and other experts. The Venture Challenge is organised by NWO and the Top Sector Life Sciences & Health (Health~Holland) on behalf of the Ministry of Economic Affairs and Climate Policy.

Apply to participate in the autumn around!

From today onwards, you can apply for the next round of the Venture Challenge. Candidates who submit the application form before the deadline of 14 June 2022 have a chance of obtaining one of the maximum of six places available for the forthcoming autumn round. The programme will start in September, and the plans will be presented to the jury on 18 November. All information about the NWO Venture Challenge, including the application form, can be found on the programme page on the NWO website.

More information about the Venture Challenge 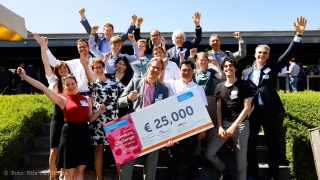